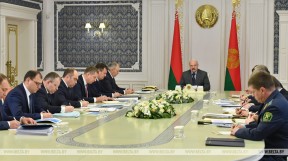 Belarus President Aleksandr Lukashenko is holding a meeting to discuss efforts to ensure the efficiency of the fuel and energy complex in the country on 6 February, BelTA has learned.

“We have gathered together to discuss a number of measures concerning the fulfillment of forecast targets and, there's no need to conceal anything, our efforts to overcome negative trends which emerge in our economy in connection with recent events in the world and, first of all, in the relations with Russia,” Aleksandr Lukashenko said. “These are not only narrow issues. Everybody is aware of such issues as oil and gas deliveries, food wars, and they, unfortunately, have become habitual in recent time.”

The head of state asked what the government could do to solve urgent issues, to ensure the growth of the gross domestic product, to implement budget parameters, to maintain price stability and, what is the main thing, to guarantee a gradual increase in people's incomes. “We cannot give up on any programs, and not only because this year is the year of exams,” the president added.

Aleksandr Lukashenko reminded that disagreements on energy issues emerged with Russia, Belarus' closest partner, once again. It has happened regularly for 13 years already in spite of mutual obligations, he said. “However, when agreements were signed we received firm guarantees. For example, Russia committed itself to import 24 million tonnes of oil (2 million tonnes of oil every month) to Belarus this year. They supplied 500,000 tonnes, only a quarter, in January. Please tell me what has been done to make sure that Russia is fulfilling its obligations,” the head of state said.

In his words, Belarus has to revise its economic development plans too often. “Therefore, I would like to know about the mechanisms of compensation for losses which our country inevitably sustains in this period through no fault of its own. Requirements are known – people in Belarus should not be affected by any consequences of any maneuvers of our partners,” the Belarusian leader emphasized.

The president also wanted to listen to the proposals of the government regarding the search for alternative suppliers of energy resources and reliable delivery channels. “Once again, this time publicly, I reiterate: all oil refineries should be operational. We must ensure the demand for oil products not only on the domestic market, like we are doing now, but also fulfill our contract obligations on foreign markets, i.e. the import of oil products to Europe, Ukraine, other countries,” the head of state stressed.

BelTA reported earlier that on 7 February Aleksandr Lukashenko is set to meet with his Russian counterpart Vladimir Putin in Sochi. During the talks they will discuss the deliveries of Russian oil and gas to Belarus. And the recent instruction which was given to Belarus' Energy Ministry Viktor Karankevich shows that the today's meeting is the so-called attempt to synchronize watches before the negotiations with the Russia side. “Be prepared. I need information on gas on Thursday,” the head of state told him during the working trip to Dobrush.

At the meeting with journalists in Dobrush the president said that “some moment of truth had come” in the negotiations. “We have built these good relations [between Belarus and Russia]. We were the architects of these relations. Are we the ones to break them at the end of our political career? We cannot be here forever. The question is what legacy we will leave,” Aleksandr Lukashenko said.

“Russians have got on their high horse and are trying to bring us to our knees. What we are asking them is: if you cannot provide us with duty-free oil within the Eurasian Economic Union (you are trying to fool us around with this tax maneuver), then sell it to us at global prices,” the head of state said. He noted that they in Russia do not agree to that and insist on a substantial premium for companies for supplying oil to Belarus. “How do you supply oil to Hungary, Poland and the West? Without any premium. Can an elder brother treat the most allied nation in such a way?” Aleksandr Lukashenko wondered.

According to the president, Belarus wants honest, transparent and sincere cooperation with Russia. “We are not asking for any additional preferences, just the same terms as they offer the West. They have suggested that we pay $127 per 1,000 cubic meters of gas. Spot prices in Europe are under $100. We see what is going on around us and we know how to count,” he stressed.

“Do not be afraid. We need to straighten relations. We need to pass to a new generation what we have achieved [in relations with Russia in the previous years] in a decent way,” Aleksandr Lukashenko concluded.