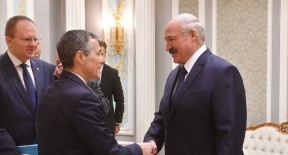 Belarus is ready to provide the most favorable investment conditions to Swiss business, Belarus President Aleksandr Lukashenko said as he met with Head of the Federal Department of Foreign Affairs Ignazio Cassis 13 February, BelTA has learned.

Welcoming the foreign guest, the head of state remarked that Belarus is often called Eastern Switzerland. “I am not against this definition at all. Switzerland has achieved this favorable status worldwide thanks to its policy, immanent neutrality and exceptional honesty in relations with other states,” Aleksandr Lukashenko said. “However, there are certain differences. Belarus is a plain country covered with forests, rivers and lakes. One of the most attractive things for people in Switzerland is the availability of mountain resorts. Your country is a beauty with its mountains. Unfortunately, there are no such landscapes in Belarus.”

The president remarked that Belarus and Switzerland have always had good and kind relations. “But I think we still have room for progress, especially in our trade and economic relations. The economy is the main thing. We are ready to provide the most favorable investment conditions to Swiss business,” he stressed.

As a positive example of interaction between the two countries, Aleksandr Lukashenko mentioned a decision to appoint the ambassador of Switzerland to Belarus and to open the Swiss embassy in Minsk. “This will be a good step in bolstering our cooperation,” the head of state said. “Your visit is very important and timely. And I am convinced that it will give an impetus to the enhancement of our cooperation.”

Political contacts between the two countries have been increasingly vibrant. In 2017, the first parliamentary group of friendship with Belarus was founded in the Federal Assembly of Switzerland. Chairman of the House of Representatives of the National Assembly of Belarus Vladimir Andreichenko visited Switzerland in 2018. The first deputy prime minister of Belarus and the chairman of the board of the National Bank visited Switzerland in 2019.

In May 2019, the Federal Council of Switzerland decided to raise the level of diplomatic service in Belarus. Ambassador Extraordinary and Plenipotentiary of Switzerland to Belarus Claude Altermatt presented credentials to the Belarusian head of state in September. The embassy of Switzerland will open in Minsk on 13 February.

As far as the trade and economic cooperation is concerned, a record increase in Belarus' export of goods and services, investment raising has been posted in recent years.

In 2019, Belarus-Switzerland trade reached $258.2 million and exceeded the level of 2018 by 38%. Belarus' export went up 34.7% to $40 million, import soared by almost 40% to exceed $218 million. Specific goods, car bodies, products from stone and other minerals, vegetables were among Belarus' major export items. Switzerland delivered electric transformers, rolling stock details, medications and medical equipment, base metal products to Belarus. Equipment for the modernization of the Belarusian manufacturing industry accounted for a major part of the import.

Switzerland is one of the top ten consumers of Belarusian services, especially transport, computer, telecom and information ones. It is noteworthy that the trade in services with this country is bigger than the trade in goods. The export of services to Switzerland increased by 30.5% to $180 million in January-November 2019.

Switzerland is also one of the top five investors in Belarus in terms of foreign direct investments on a net basis ($41 million in January-September 2019). There are 103 organizations with Swiss investments, including 37 joint ventures and 66 foreign companies, 39 representative offices, in Belarus.